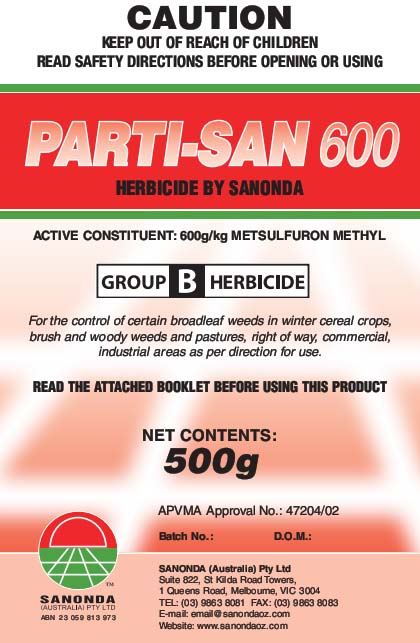 Parti-San is a "new generation" sulfonyl urea. As post crop and weed emergent herbicide it controls most broadleaf weeds, annual rye grass weeds, including hard to kill weeds like Soursob. The Label combines the use in the situation wheat, barley, triticale and cereal rye and pastures, rights of way and industrial areas.

It is an environmentally friendly product, completely biodegradable, breaking down into natural occurring products in both soil and water.

It has a very low toxicity level of LD oral> 5000 mg/kg which is considerably less than the toxicity of common table salt. The disruptors of plant cell growth mode of action.

How to use PARTI-SAN Cereal Herbicide?

Parti-San is a highly active herbicide and the volumes of product to handle are relatively small. The cost for transport and storage are minimal.

How does PARTI-SAN 600 Cereal Herbicide work?

Parti-San is taken up through the leaves and the root system and moves throughout the plant. The sulfonyl urea molecule achieves blockage and cell division in the weed resulting in plant growth inhibition and kill. The typical symptoms of the product activity are yellowing or reddening of weed leaves. The kill is usually achieved within 1-4 weeks after application. In crops such as wheat , triticale, barley and cereal rye the product is selectively broken down to non-herbicidal products so that the tolerant cereal crops are not detrimentally affected. Crops stressed by severe weather conditions such as drought, frosty conditions, waterlogging, excessive soil acidity or alkalinity , poor nutrient status, disease, nematode or insect damage can reduce the rate of breakdown of Parti-San causing crop yellowing and growth retardation, however the crops may recover without loss in yield.


A nil withholding period is applicable for PARTI-SAN 600 Herbicide by Sanonda.

To view, download or print the label, click on the "Label" link at the top of the Details page. Always follow the label directions.
For specialist advice in an EMERGENCY only phone 1800 033 111, TOLL-FREE, ALL-HOURS, AUSTRALIA-WIDE